Where to find the jaguar? Understand about the habits of this feline 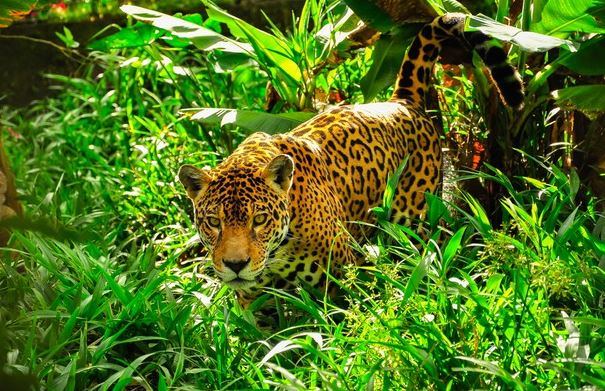 Anyone who wants to know where to find the jaguar should keep in mind that they will need to bet on safaris in the wetland, as the largest cat in the American continent is strongly present in it.

Despite originating in the southwestern United States, reaching as far north as Argentina, jaguars are extinct in the USA and almost rare in Mexico, but in Latin America and Brazil, they are found.

However, in addition to knowing where to find the jaguar, it is important to know more about this animal that arouses such curiosity, isn’t it? So, stay with us, as we will bring information about their habitat, characteristics and curiosities.

Those who want to take photo tours with the aim of capturing beautiful images about the third largest cat in the world, since the jaguar is only behind tigers and lions, need to know where to find the jaguar.

The jaguars are found in the Pantanal, in the cerrado, in the Amazon and in the Atlantic Forest. However, the quantity has been decreasing considerably due to the way the man has been acting.

Above, we talked a little about where to find the jaguar. This knowledge is very important, but in addition to it, it is also essential to know more about this animal that draws so much attention.

Therefore, it is necessary to know that jaguars are nocturnal animals. With this, whoever wants to take photographic tours will need to have courage, because they appear at night more often, as this is the period that they go out to hunt. During the day, they usually sleep in trees and close to rivers.

The larger the jaguar is, the more alone it tends to stay and that is what makes it different from lions, as they like to stay in packs. To mark its territory, the feline makes use of urine, excrement and the mark its claws leave, mainly on trees.

Your diet is called a “banquet or hunger”, but what does that mean? She can go without eating for up to a week, but nothing prevents her from eating a large amount of meat in a single day.

The black spots that make up the jaguar’s body are called rosettes, but the highlight is precisely the fact that each animal has a unique combination. Like this? The pattern of spots is different from one ounce to another.

You still don’t understand? Your fingerprint is not the same as other people’s, is it? Yes! So, with jaguars it is the same way, because the formation of the spots varies from one feline to another.

Where can i see a jaguar?

After so much important information, we want to reinforce that the Pantanal of Mato Grosso is the right place for those who want to know where to find the jaguar. Now, contact us and schedule your trip with the best tours.

Do you need help?? Contact us
Start talking
Hi! Click on one of our attendants below to chat on Whatsapp.
The team usually answer within minutes.
Wild Jaguar Safaris
Hello,